The Victoria and Albert Museum is hosting a videogames exhibition to give an insight into the design process behind the making of some known and lesser known games. I took some time to visit the exhibition and I found it inspiring to see how studios are different in their approaches, thanks to size, budget and general preferences. The exhibition features games for various consoles and with various degrees of sophistication. 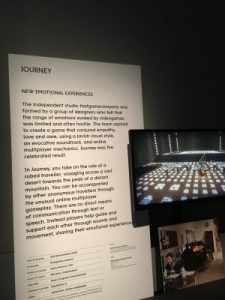 As you walk into the exhibition, you immediately enter the world of “The journey”, which I find one of those beautifully crafted adventures. You hear about the emotional journey the designers wanted to bring people on, how they conceptualised the imagery that is central to the game experience. You can see the mountains and flying characters develop from concept art into its final concept. I personally loved the way you can read the various storylines for each level, the emotional experiences and gameplay settings in one big colourful spreadsheet. Call me nerdy if you like, but that to me is an exemplary game design document. 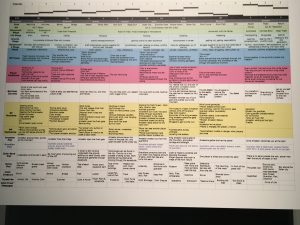 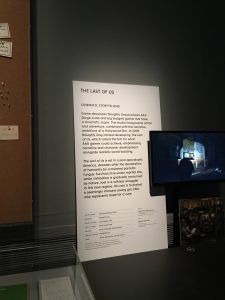 You then enter the world of “The Last of Us”, which is pitched as cinematic storytelling. You see how the characters are shaped and formed and how the environment is used to share the storyline. As you move forward in the game, you uncover more and more of the back story. It was also refreshing to see a different approach to the highly structured game design document with a big pinboard with post its, depicting the adventure through the game and character as well as story considerations for each of them. It looked like it had been a lot of fun to create. You can also see how actors gave the lifelike experiences to characters before they were animated. 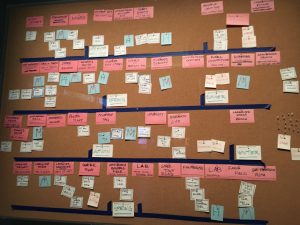 The one thing I felt walking away from this example is that it seemed to be big budget studio material with a vast team. The next example “Bloodborne” definitely continued on what seemed like a big budget theme. Most people can’t afford to hire an orchestra and a choir to record music for your game. Saying that seeing how they use music to enhance the game. Architectural drawings to create the environment.

I have to say looking through the design notebooks and sketches for characters, it gives a deeper appreciation of what goes into creating a great game. I will urge my clients in the London area to visit, to have them realise that in fact there are so many aspects to game design, which require input, money and time. 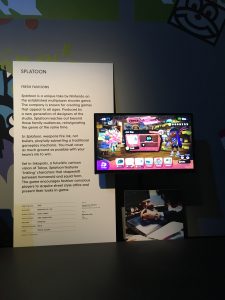 To cover more of the genres, the exhibition also includes the game Splatoon, which aims at fashion conscious younger generations. It is fun to see how the characters for the game evolved through their development process and how the team pitched to one of the Nintendo all-stars behind Mario. In contrast, then you also have an example of a self-taught indie game developer and the process she goes through to make small puzzle style games that she likes. she uses self-made graphics created in Photoshop then drags them into Unity and programs a bit of C# to generate the interactions. 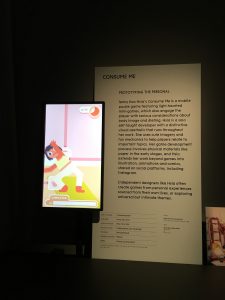 The exhibition really gives a good flavour of what game design and development entail when you take the time to stop and read and immerse yourself. You can also play some of the games and hear various behind the scenes talks, recordings, etc. I found it inspiring to see and I am taking away that how I work actually is very reflective of the industry we learn so much from. I think my training in game design definitely assisted in creating these methods, which are not adopted by everyone in our gamification industry. As the exhibition points out, there are more ways than one to reach an end result. I just personally find peace in the fact that I stay true in a large scene to the origins of game design principles.

In other rooms, you have a light touch on some of the negative criticism associated with games from sexism, to white male domination, English language domination, etc. It gives examples of how game makers play with these concepts either to point them out or as a social narrative or simply to test if anyone would pick up the problem. You can also listen to a diverse set of game industry insiders and journalists to hear how the industry is consistently evolving and adapting. It is a bit of a light touch in my view on the whole point of diversity and inclusion, but at least it is there. I was by then buzzing with design ideas, so maybe that also clouded my judgement on it.

I think the next room was a bit of a homage to fans and communities and touches even lighter in e-sports, social media following and other funny things people do when they are super fans of a game character. They do want to create the feel of being live at an e-sports event, but then you only have one bench to sit on or the floor.

the final part of the exhibition then shows a variety of arcade games and party games, which are definitely fun to try and play. None of them I had seen before, but quite a few were engaging to play. 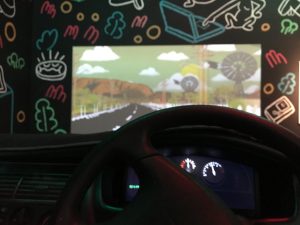 If you are in London in the near future and have an interest in the design and development side of gamification or games, then I would highly recommend a visit. There were a few parents with children and only the kids who actually wanted to know how to make games really lasted the distance, the ones that came to play only were done rather fast.

The post Learning about the game design process from an exhibition in the V&A museum in London appeared first on Gamification Nation.