When I started out in gamification, I wanted to make my designs inclusive by design. One of the main drivers behind this was that what I had seen up until then didn’t quite motivate me as a woman when gamification presented in a hyper-competitive manner. I also felt that most gamification designers at the time were young, mainly white males and I thought bringing a feminine perspective would enhance the mix.

When I went looking for data, to back up my own feelings of not relating to certain designs. I came across several interesting pieces that confirmed my own views and also enhanced them to say that in fact feminine and masculine behaviours are definitely a socialised condition and they exist on a spectrum. Both genders can display more feminine and more masculine styles of responding depending on the situation.

In 2015, I first spoke about the differences I came across and the gamification design implications for it at the Gamification World Conference in Spain. I had very mixed responses and a serious backlash of men wanting to disprove what I had said, a very supportive voice from women in general and from men with daughters and men from parts of the world where equality for women takes a completely different form to what we are used to in the European world. I remember never making it back into the conference room thanks to the long queue of people with questions.

In any case, it showed me I had touched a seemingly raw nerve with a few people. It also led me to find more research on other factors influencing inclusivity, namely age, culture and ability. Some men had in their fury of a woman explaining that we are slightly different in how we process emotions and behaviours, dismissed gender and claimed age was much more of a differentiator. Equally, people from various cultures came and spoke to me about racial differences, but also loved how my suggestion of making sure you invite feedback from all members of your target audience in a safe and encouraging way for them to truly express themselves could work for them.

To make inclusivity complete, we also have to pay attention to levels of ability. In one of my early workshops, I had a blind person with a guide dog and a lady in a wheelchair attending and both agreed that the term disabled felt condescending to them. For them it means a different level of ability, for both their mental capacity was the same as anyone else in the room, they just had different abilities when it came to walking or seeing respectively. I loved their way of expressing this and have ever since used the level of ability approach to describe when we need to adapt for different levels. We would automatically create levels for intelligence, so why not for ability.

When it comes to inclusive design, you can take a number of approaches. I describe mine in this image: 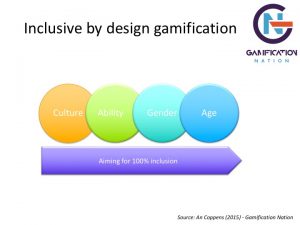 We aim for a 100% inclusion on a range of inclusion factors such as culture, ability, gender and age. In most cases that means that we may have to design more than one user journey or experience to ensure we capture a maximum audience. I don’t believe one size fits all is possible in gamification design. Our world is diverse, so our designs need to allow for this too.

When it comes to creating experiences, you can choose to adapt an existing experience by adding a voiceover for those that can’t see, you allow for contrast and texture differences for visual ability levels, you make different languages available and potentially different based on local customs. These are just some of the things to be mindful of.

In culture, we look at differences in rituals, in what is acceptable or not, what language to use and also in a company culture we look for themes, stories, narrative and heroes that could make for an interesting character. In ability, we look at various abilities such as levels of access, mode of consumption, level of physical ability, use of colours, contrast, voice, etc. In gender, we look at the subtle difference of all of us on the feminine-masculine spectrum of behaviours and we look for indicators in the target audience of which behavioural styles are more prevalent and either we design for the main one or split the experience into a number of journeys. For age, there are specific differences in player styles, we again look for the different patterns in age groups in terms of motivation and behaviour and adapt our designs accordingly.

It seems like a lot and it does take a bit of effort, yet it is not prohibitive when you ensure a solid process to capture them. For all of our multinational clients, we have held workshops in their various offices and asked survey participants to show a reflection of all of the above. Sometimes the outcome is very homogenous, most frequently it is very diverse. When we have a diverse outcome, we look for patterns and trends that unify within persona groups.

The post Inclusive by design appeared first on Gamification Nation.