For some time I have been saying that from our evidence, we find that older age groups in the workplace tend to respond better to gamification than for example Millenials, who are often the main reason why companies buy gamification. Research by TalentLMS around the use of gamification in learning found that in fact, over 90% of employees of over 45 years of age would find that gamification may make them more productive. I will say it again don’t let age be a deterrent to gamification.

We have noticed for some time that older age groups tend to respond just as well and often more to gamification in the workplace. For a lot of younger employees, it is in fact expected that workplace tools have similar feedback mechanisms as social media and games for example. For the more mature group who were used to workplace solutions that didn’t include any stimulus to help them perform better, this is indeed innovative and helpful. 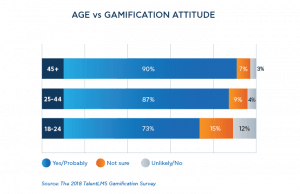 We also find that if given a safe and private environment to test out how you are doing with instant feedback on performance tends to attract more frequent visits from experienced employees to test out other ways of doing the same thing. For a lot of the less experienced workforce, the first step is still mastering a skill and then practising it in real life for feedback, before they will return and test new theories. For me, these results confirmed what we already had anecdotal evidence for.

Gamers are more receptive to gamification

This may not be a surprise to anyone but the same research found that gamers actually responded better to gamification than non-gamers, or at least they said so in a survey. I often find that if you ask someone if they will like something more or let them experience what both feel like, may come to different conclusions. I don’t know how it was measured other than a survey, so we can’t really comment there.

What the survey results also mentioned that 42% of the over 45’s play games every day in comparison to only 31% of the 18-24 age group. I think it is great to see that age is no longer something to worry about when it comes to gamification. I had a hunch a long time ago that the perception was slanted towards the younger age groups because of video games, but in fact crosswords, sudoku and solitaire have been mighty popular with the older groups. The reasons we play and what motivates us in gamification will also change over time, competition is still higher in younger age groups and personal satisfaction in completing the challenge is more prevalent in older workers.

I think the research carried out by TalentLMS is great and definitely worth exploring. I have followed it for a number of years and often used it to assist clients in making decisions towards gamification one way or another.

The post Don’t let age be a deterrent to gamification appeared first on Gamification Nation.